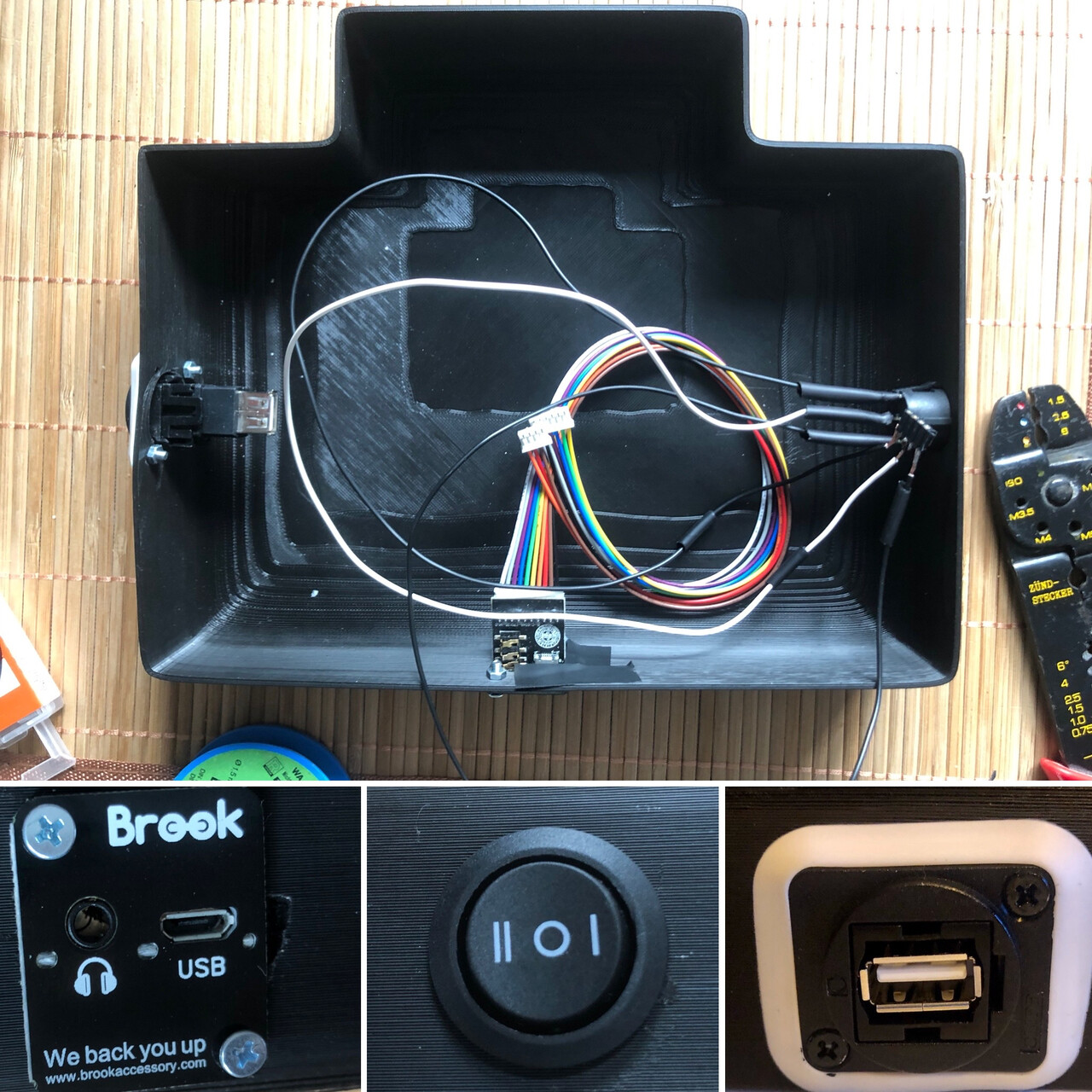 To take it even further, I added a few ports and switches... 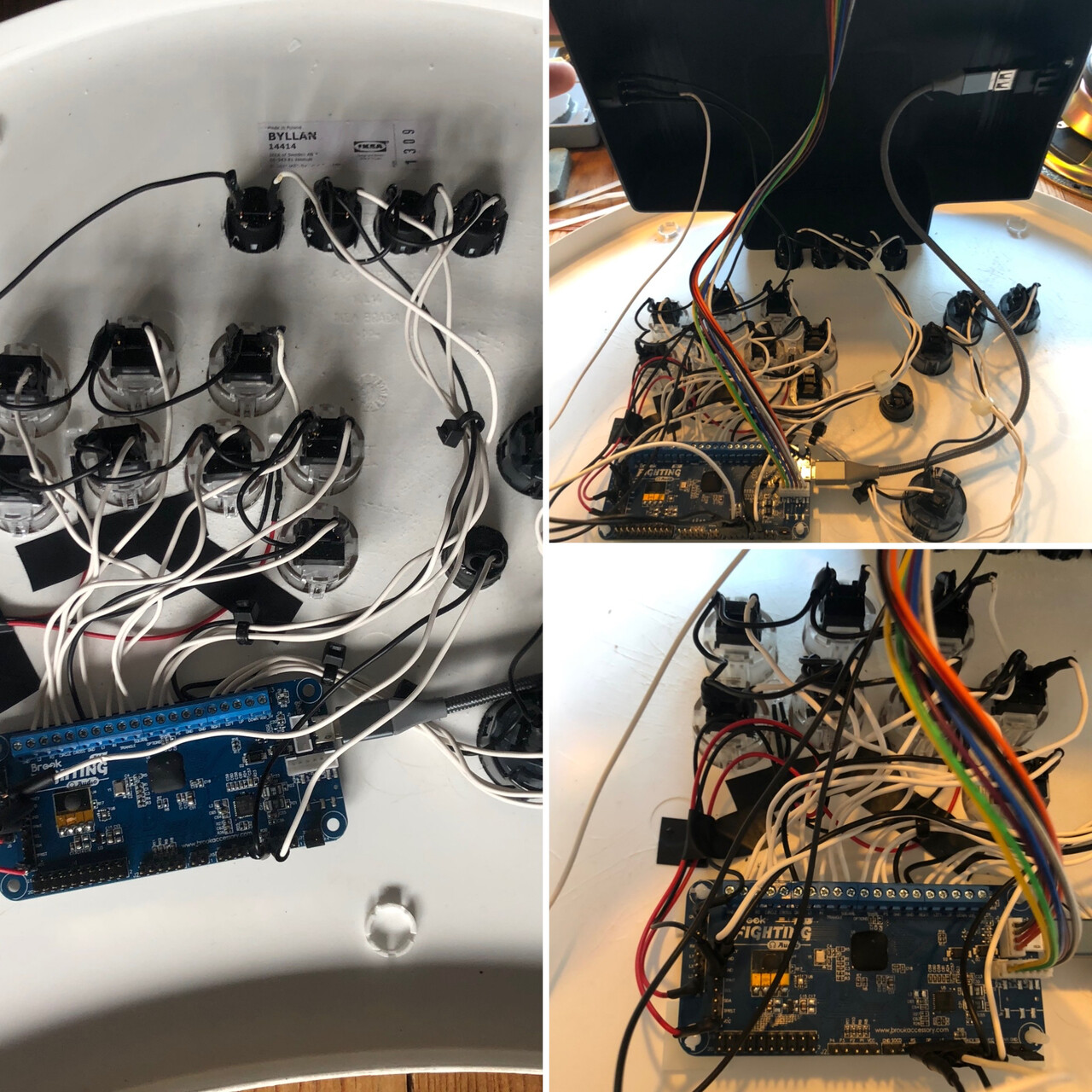 ... more switches and ports also means more wires!
I used tape to put a few UV-LEDs in place for testing, which was replaced by hot-glue later on (so it looks more official) ;) 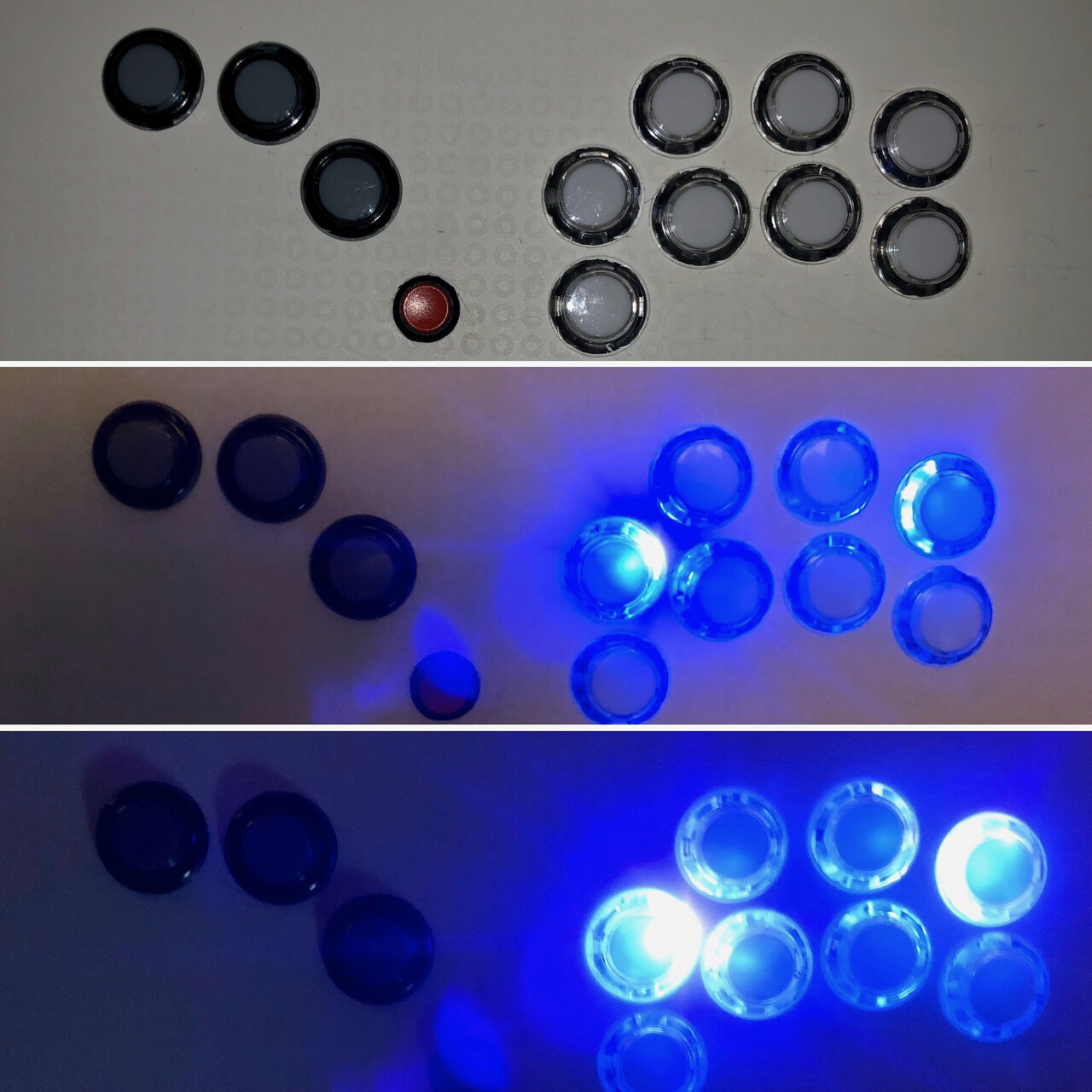 Its not easy to catch on photo - but I think you get the picture, haha - now I can find the action buttons in the dark.

I was adding a switch on top as well - the red one is the good old "turbo" switch. Another sticker found its way as well... 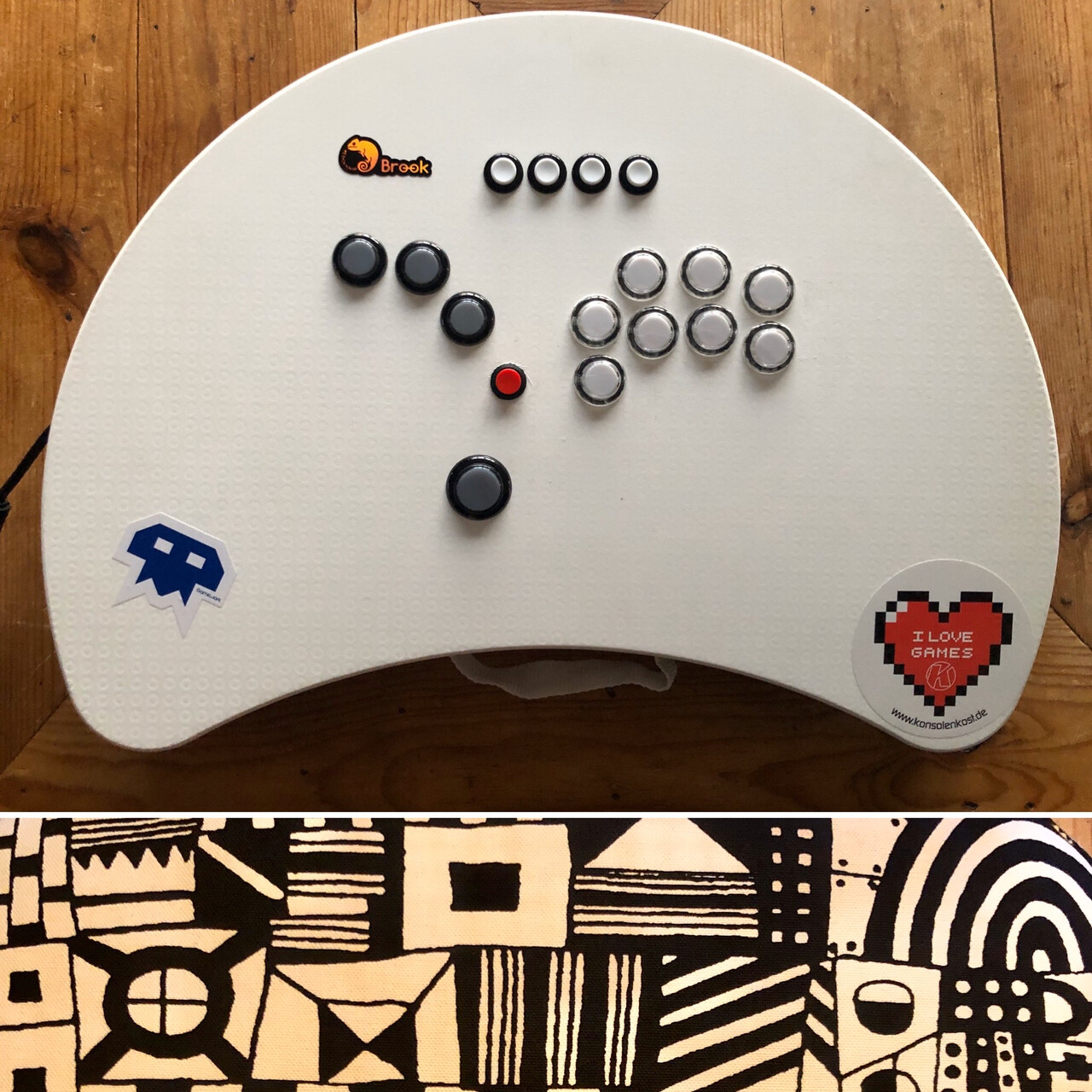 This concludes the making of my custom SLAC -  the Byllan-SLAC !
I hope you enjoyed this blog...

See you on the next one - take care! 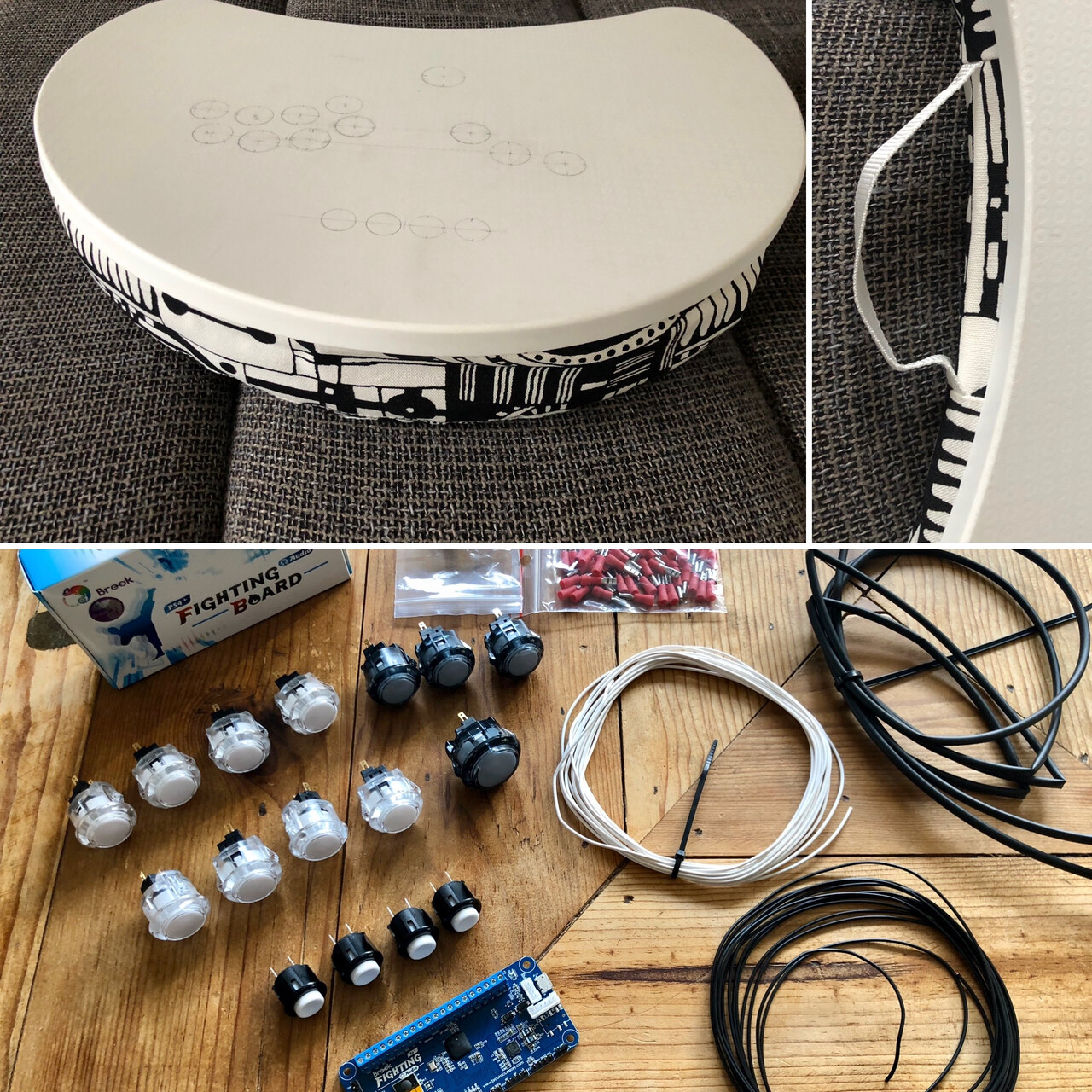 from these parts, I started to craft my first controller - a so called hitbox - or "stickless fightstick" - in short SLAC...

Nothing too special here, a good circuitboard, some high quality buttons and some wires.... and well - there is the unusual housing.
This is from the IKEA collection and is normally used to put it on your lap and place your laptop right on it - hahah ;)

I thought, this would make for a cosy and smooth SLAC case - slacking case ^^ - and it comes with a handle as well !!! 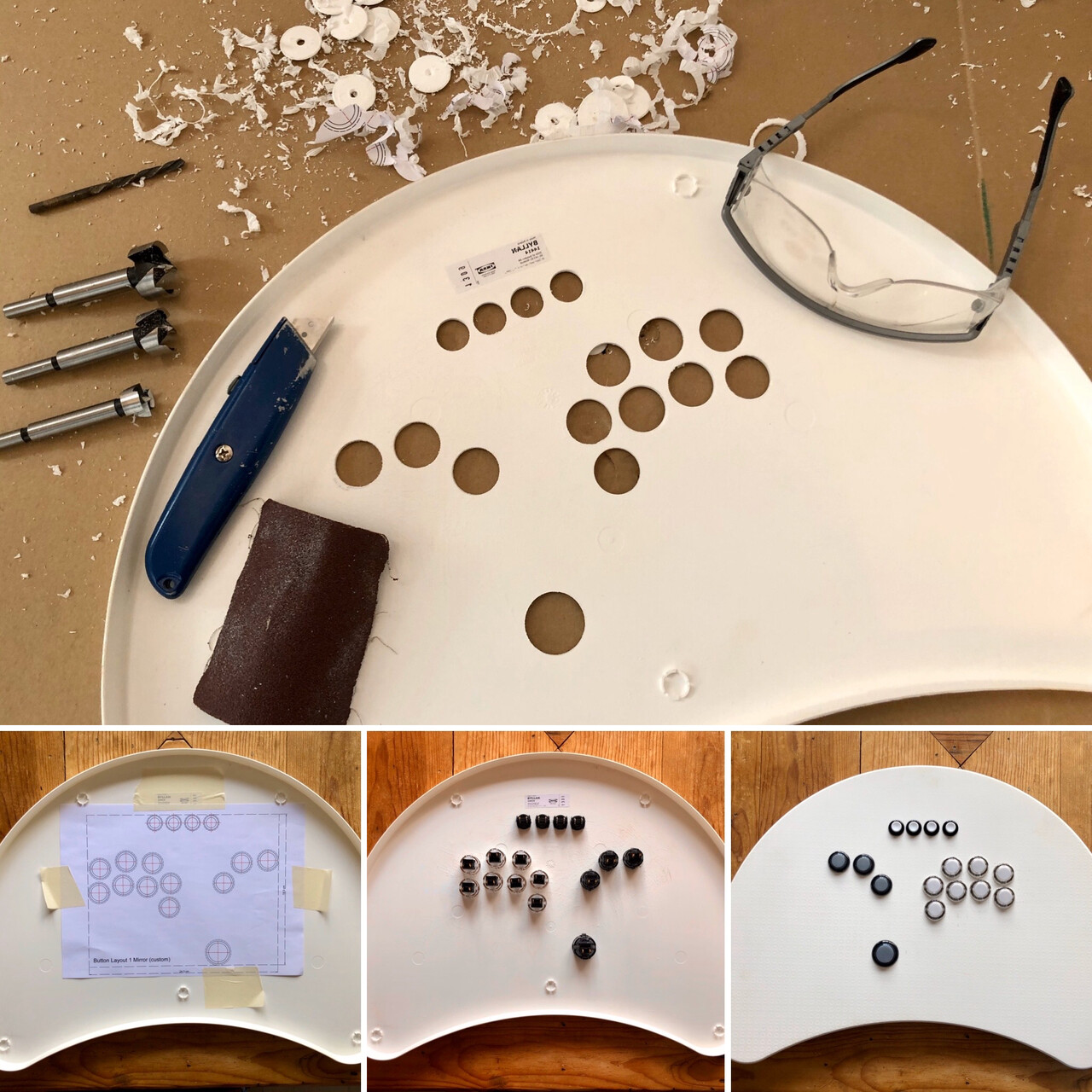 I made a mirrored copy of the button layout (which I did in CAD app) to drill out the holes for the buttons - every button fits fine!
Glad I've bought special "Faustner-drills" - they did a precise job on this... oh - and this layout is custom tailored to my (large) hands.
I wanted a larger button for my thumb + in a more relaxing position, then typical standard layouts. 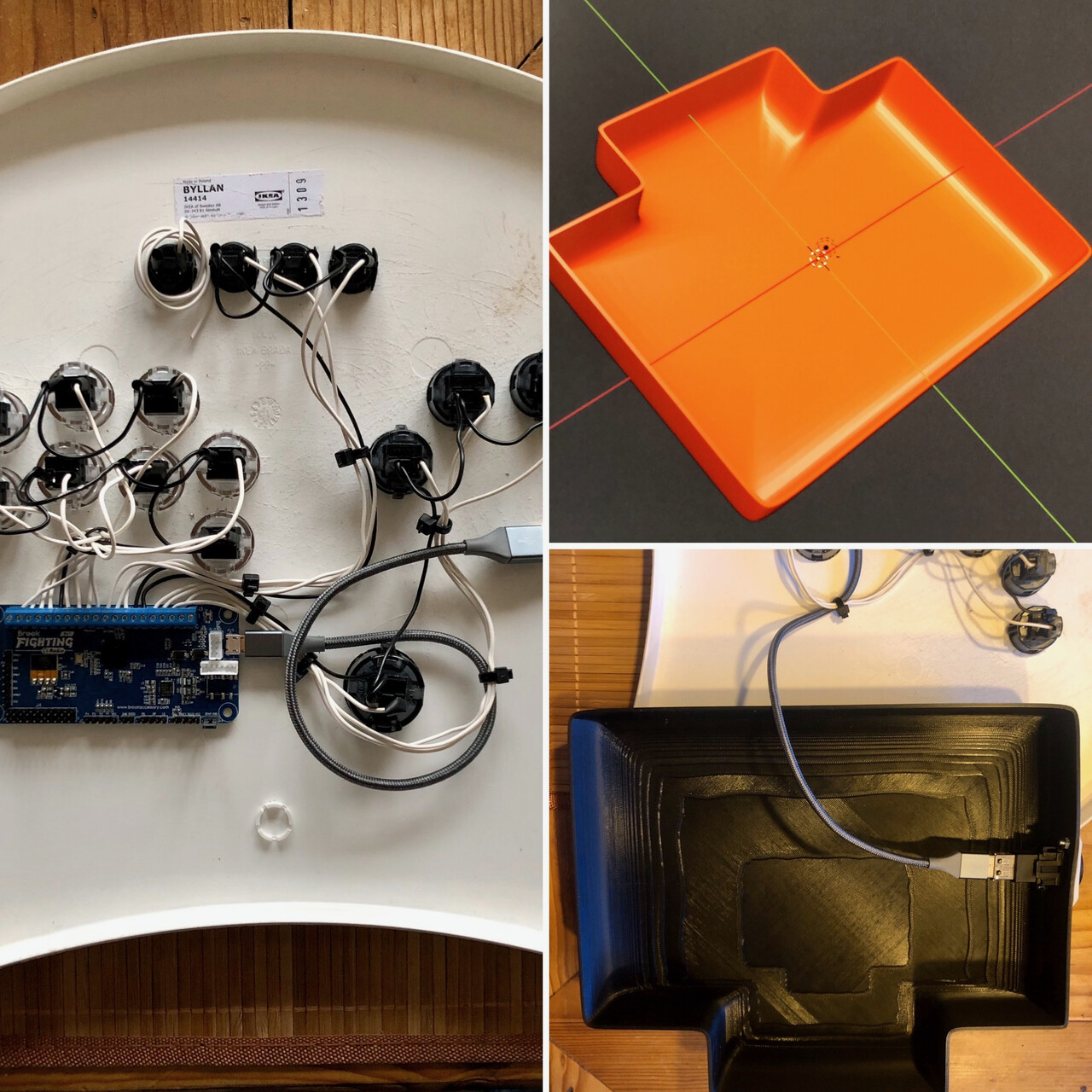 After taking care of the buttons, it was time for a first, rough wiring...  and quick testing - all buttons did work, yeah!
So far so good - but what about a housing for all this buttons and wires? Could not leave them open, of course.
I thought, this would be a good case (haha) to go for a 3D printed - well case (looks more like a bowl, itsn´t it?)
Unfortunately, I did a mistake when designing it in blender... the result were some "elevation lines" as you can see
in the lower left image... but it does its job well ! Big shout out to "Mad Chrissel" for doing the printing on his Prusa MK2. 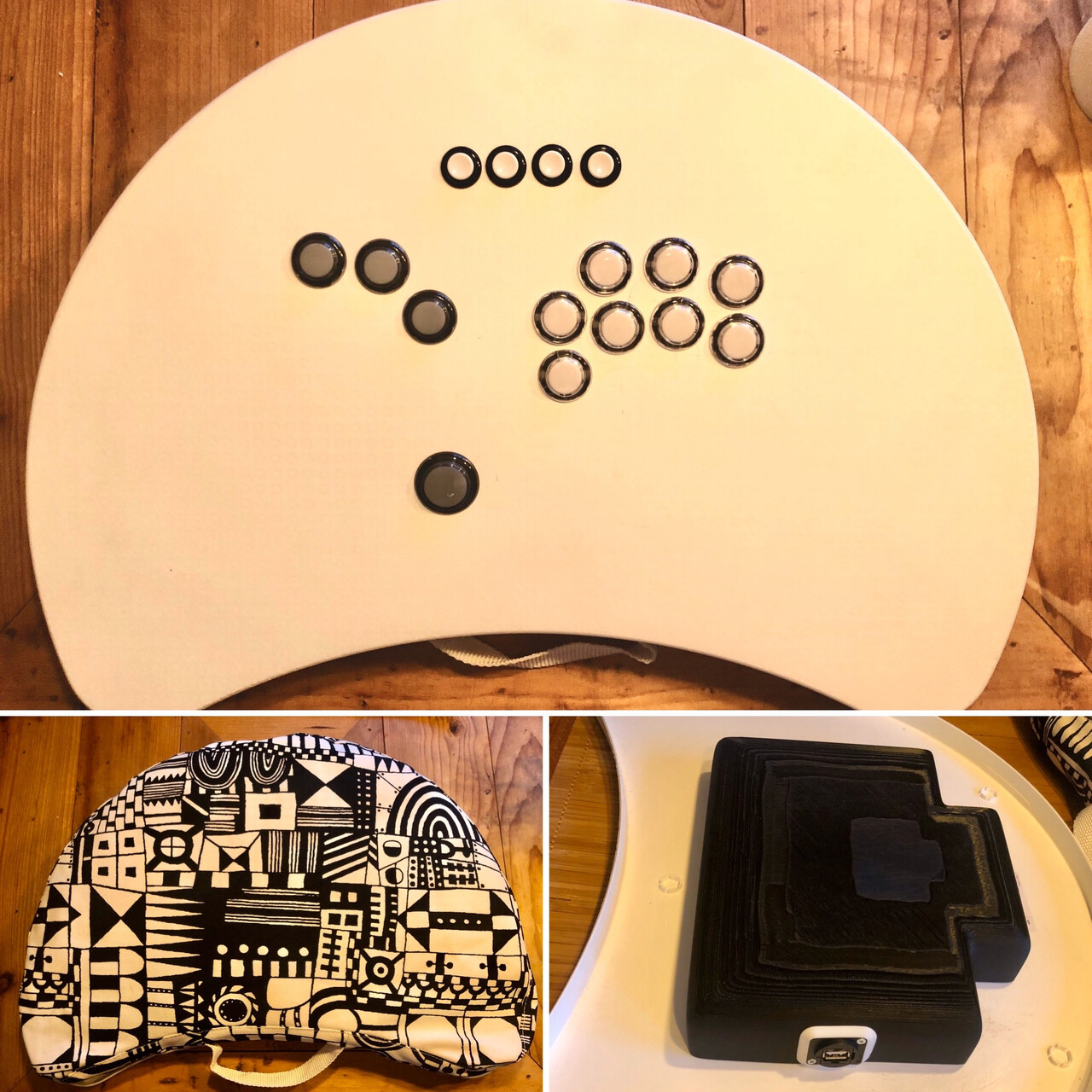 Now - this is, how it looks, all put together. Very clean and comfy... 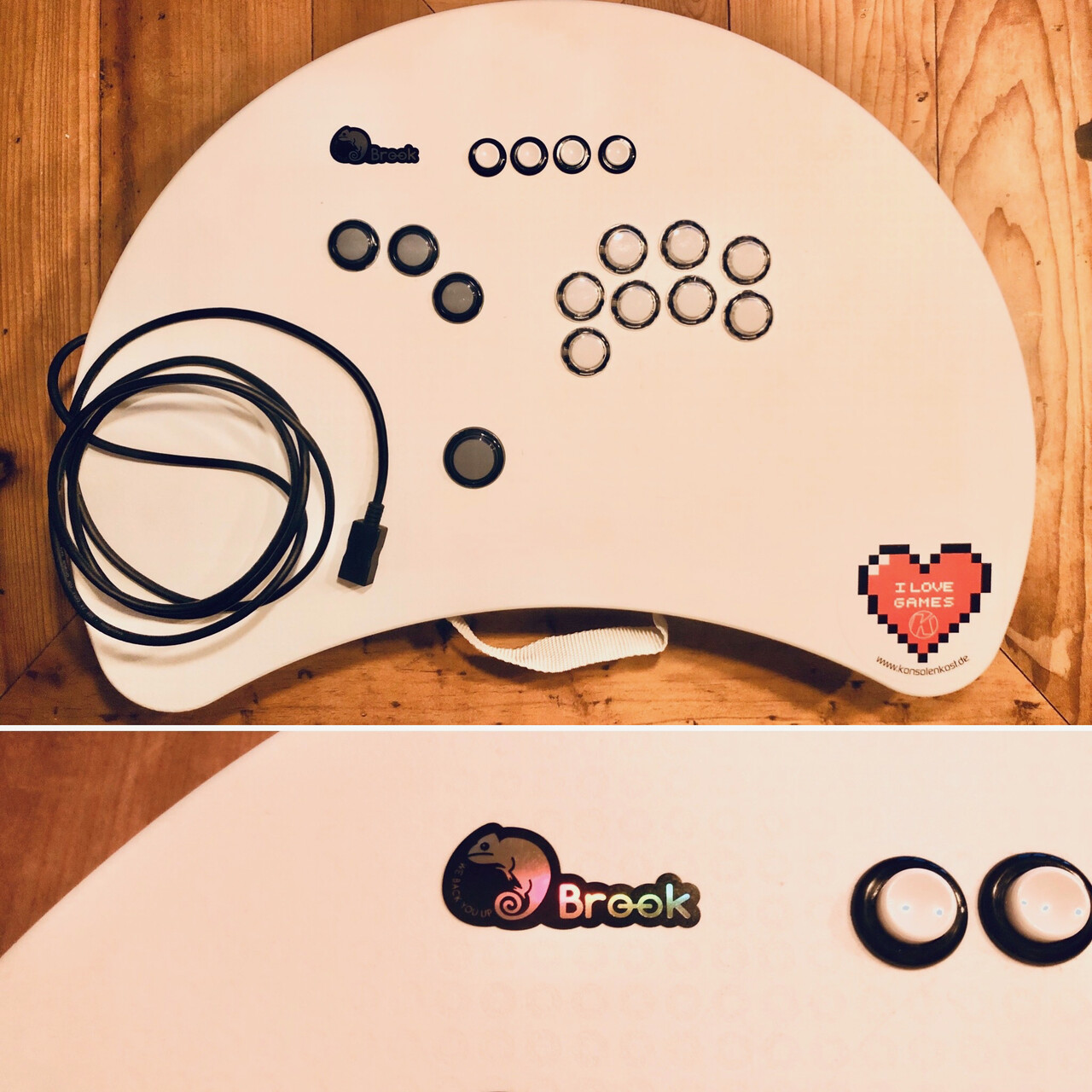 It appeared a bit too clean to me, so I decided to put on some decals or stickers, if you like. Now everybody can see, what board I have inside ;)

Dear readers, it´s been a while since my last entry. I had a few very busy month (which is a good thing)
and I honed some skills, learned new software and workflows... you may know the drill ;)

Now, this time I´d like to present some "off line" skills - I took the chance, painting some miniatures!
Yes, that´s right - no CG involved. Just some acrylic paint, a mix of different brushes to choose from
and of course: Miniatures. To me, this is kind of a cool hobby and a very relaxing and rewarding one, as well.

As an artist, I really love the level of detail but maybe even more, how they are posed.
The artists have done incredibly well, I think!

It was my first time ever, to hand-paint such small objects - I really hope you enjoy my
small but growing collection. I got some more in the works, already!

But for now, here they are - my first tabletop game-ready painted warriors and wizzards....

Starting off with the Stormcast Eternals warband:

Mostly shiny armour and weponary here - i was going for a clean and uniform look, pretty much like suggesed by the books and illustrations... 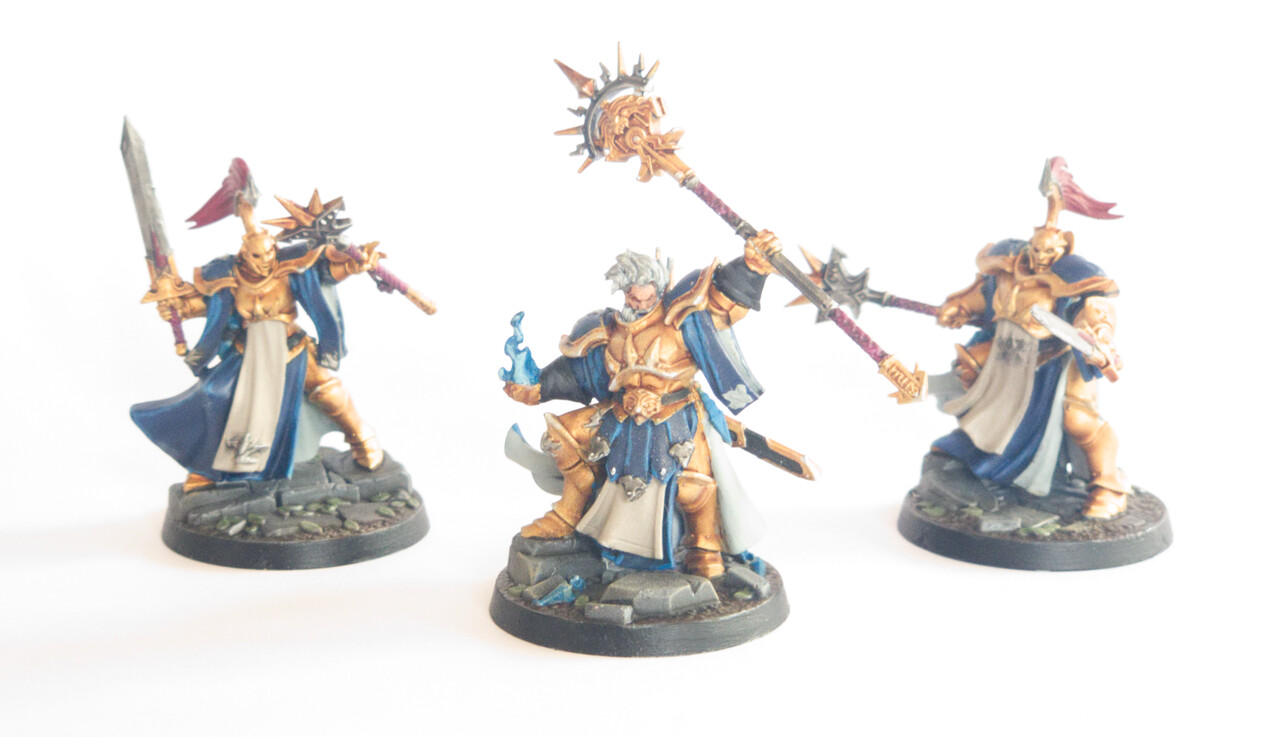 ...what an impressive small elite-troop !!! 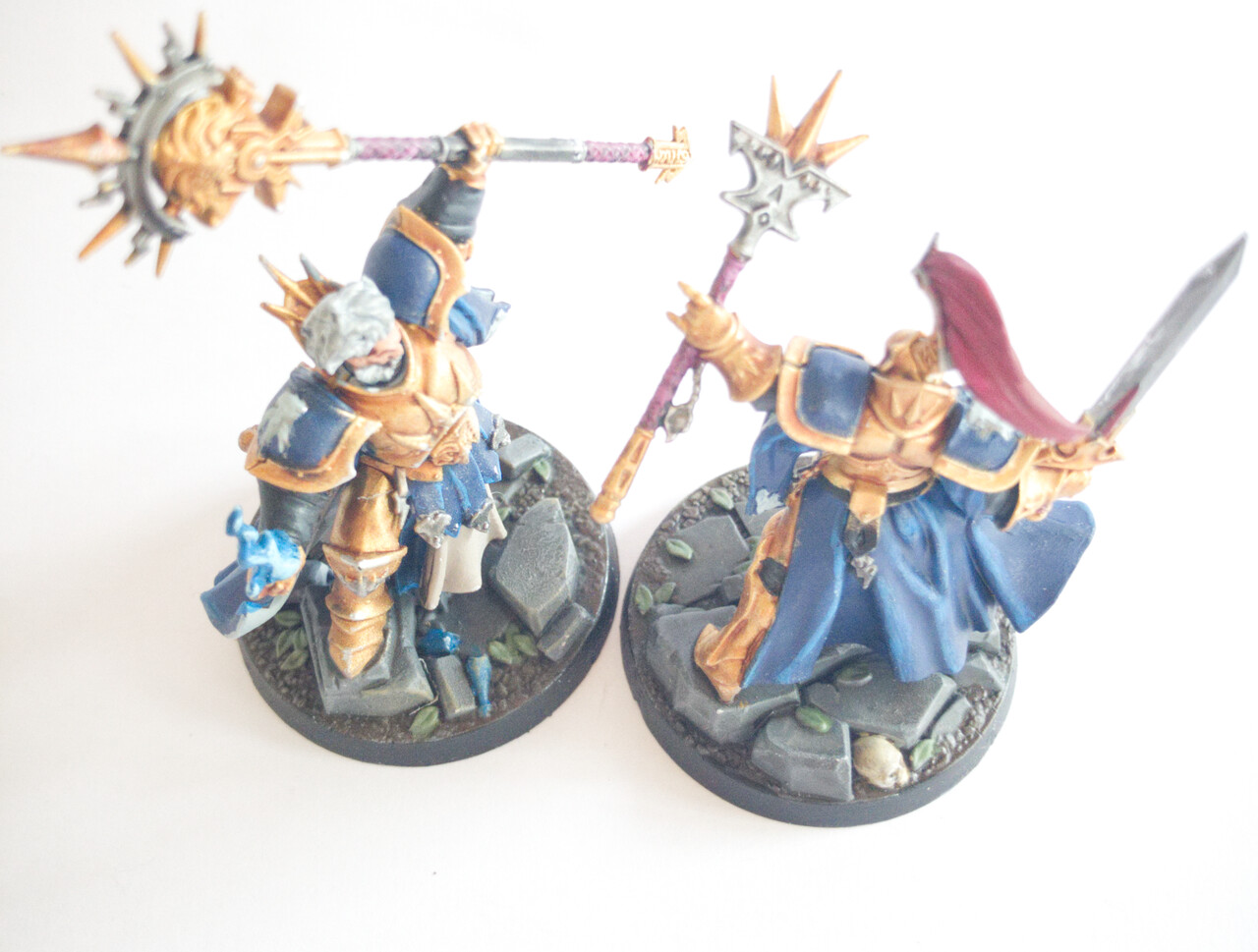 For the bases, I did go with nothing too fancy...

Followed-up by the Nighthaunts: The thorns of the Brian Queen

For the nighthaunts, I tried a technique called "Dry-brushing" - basically I tried to blend the green, gloomy areas with white ones. I liked the metal parts to look rusty and old - I used dark shading color and a "technical paint" called "Typhus corrosion"... for some extra "chain-raspiness" :) 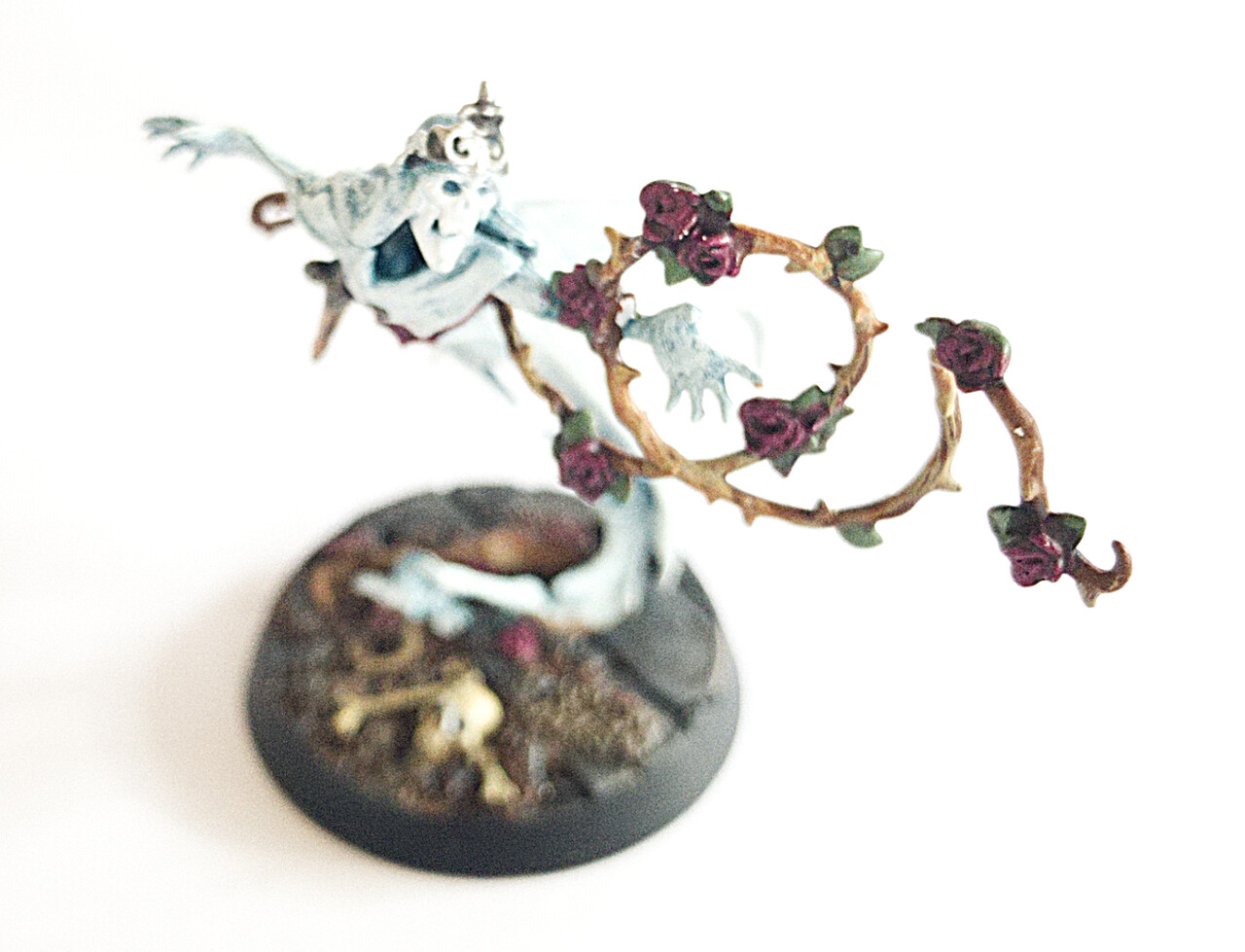 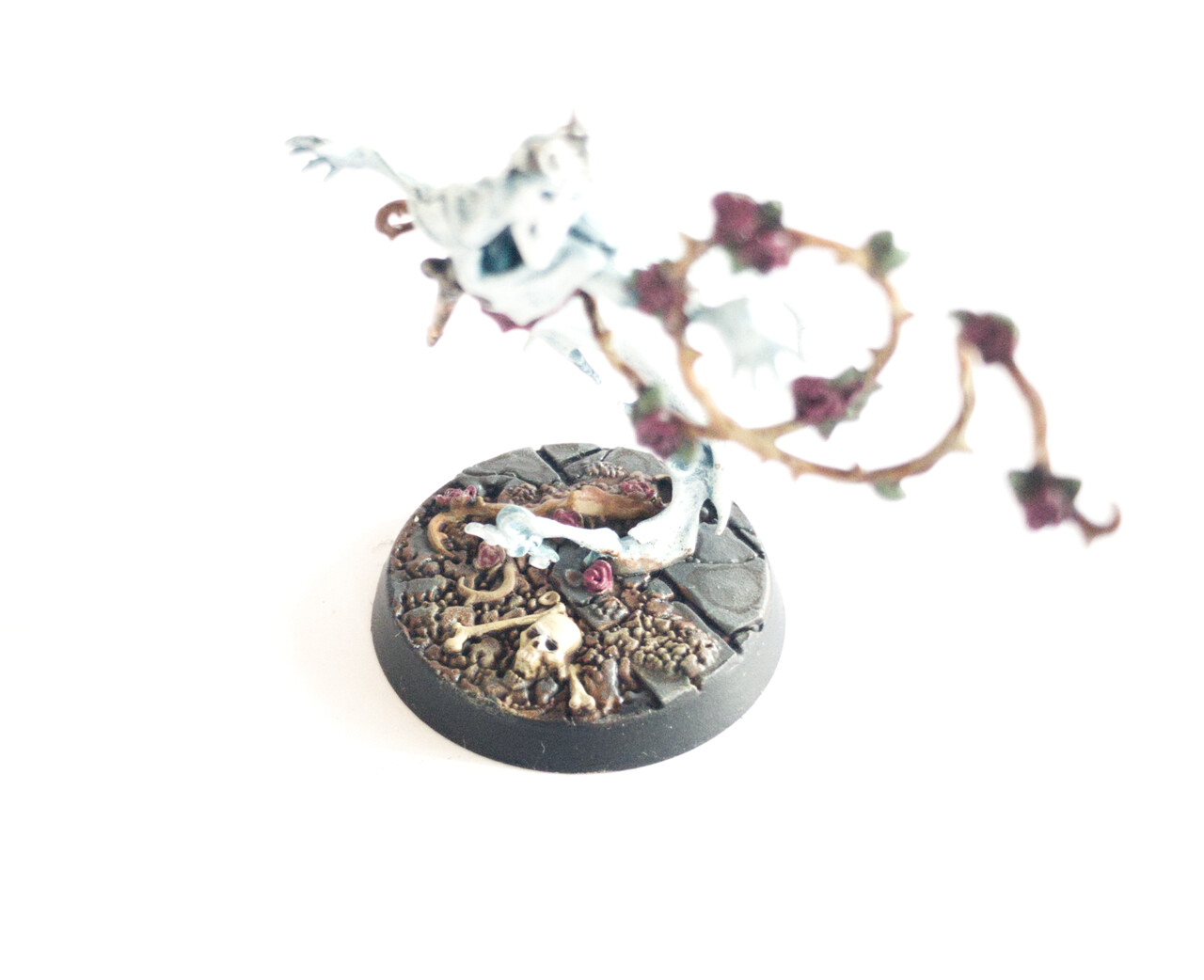 This time, the bases were a little bit more complex and detaiiled. 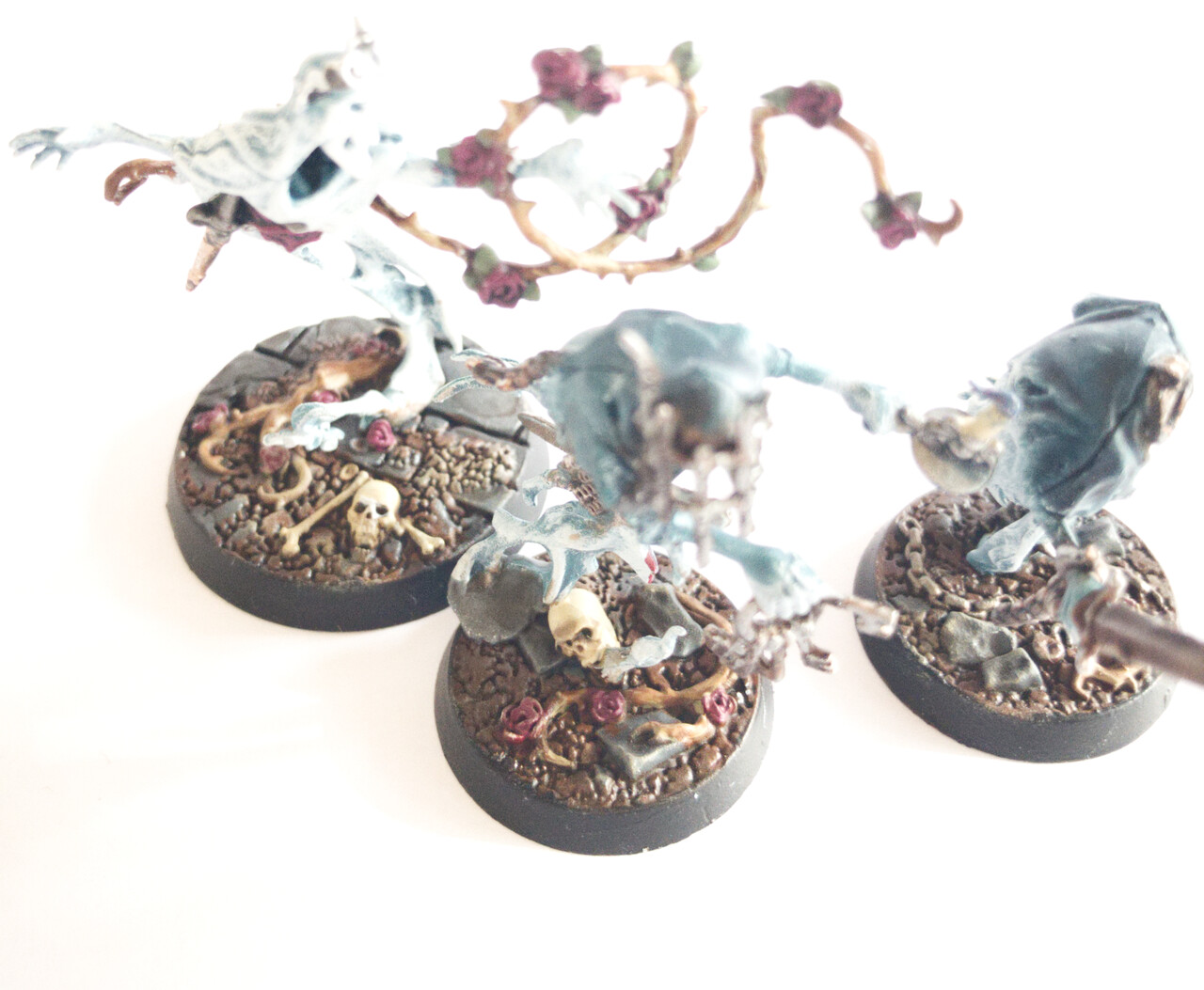 Speaking of detail(s); what´s a chainrasp without a chain?

Yeah, so here is a detail-shot of some chains: 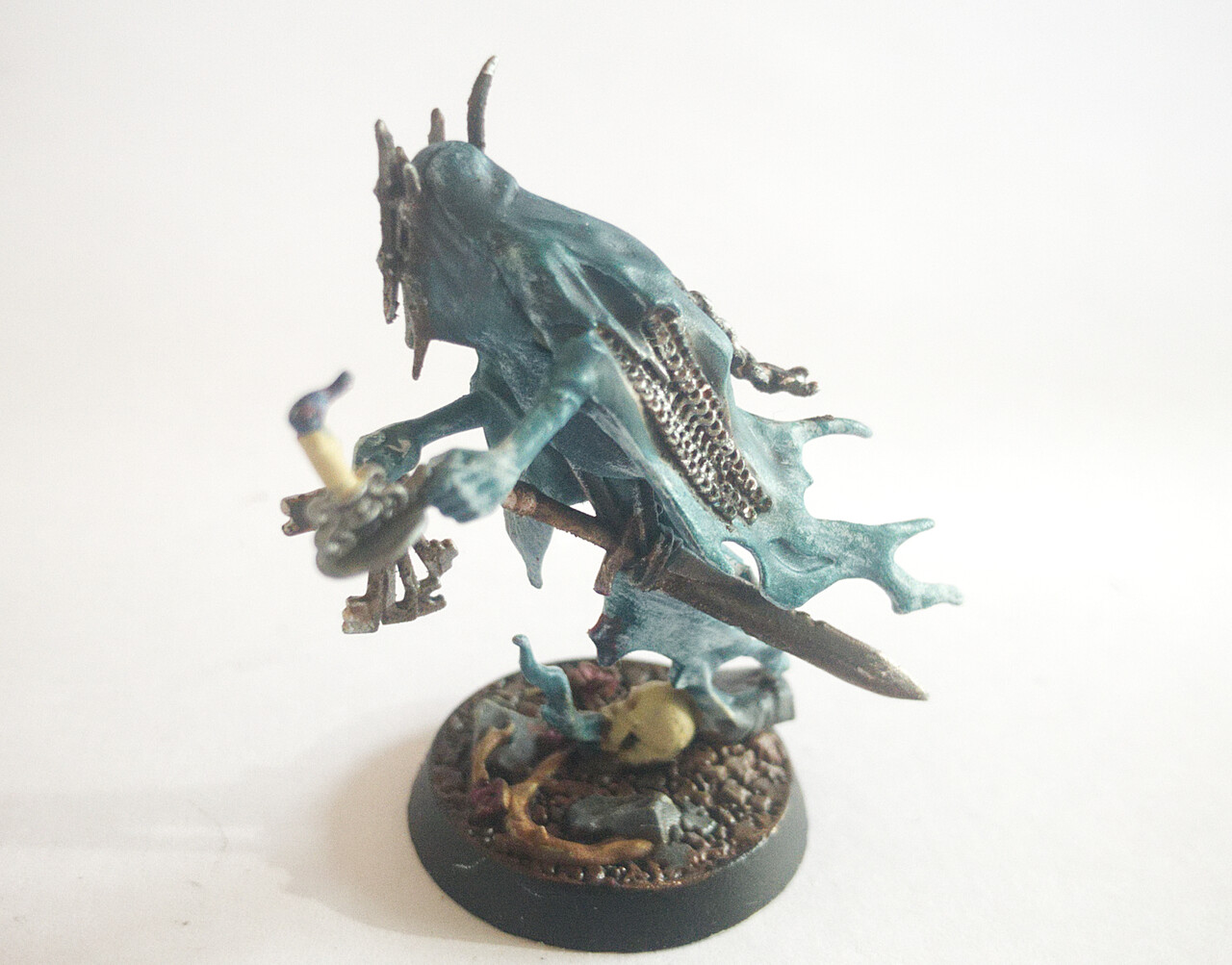 And last but not least, I decided to venture into 3D printing - nah - just dip my toes a bit:

This little thingy here, should serve as kind of dangerous portal / board marker, that sucks in the living - for usage with tabletop games. I also palnned a few more, so stay tuned! 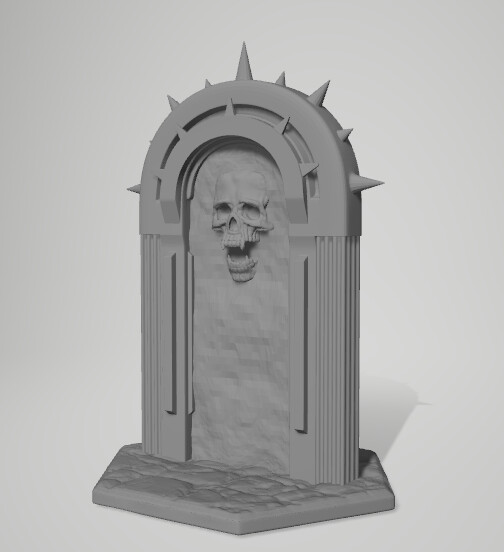 And this is how it could look, when painted (CG mockup) 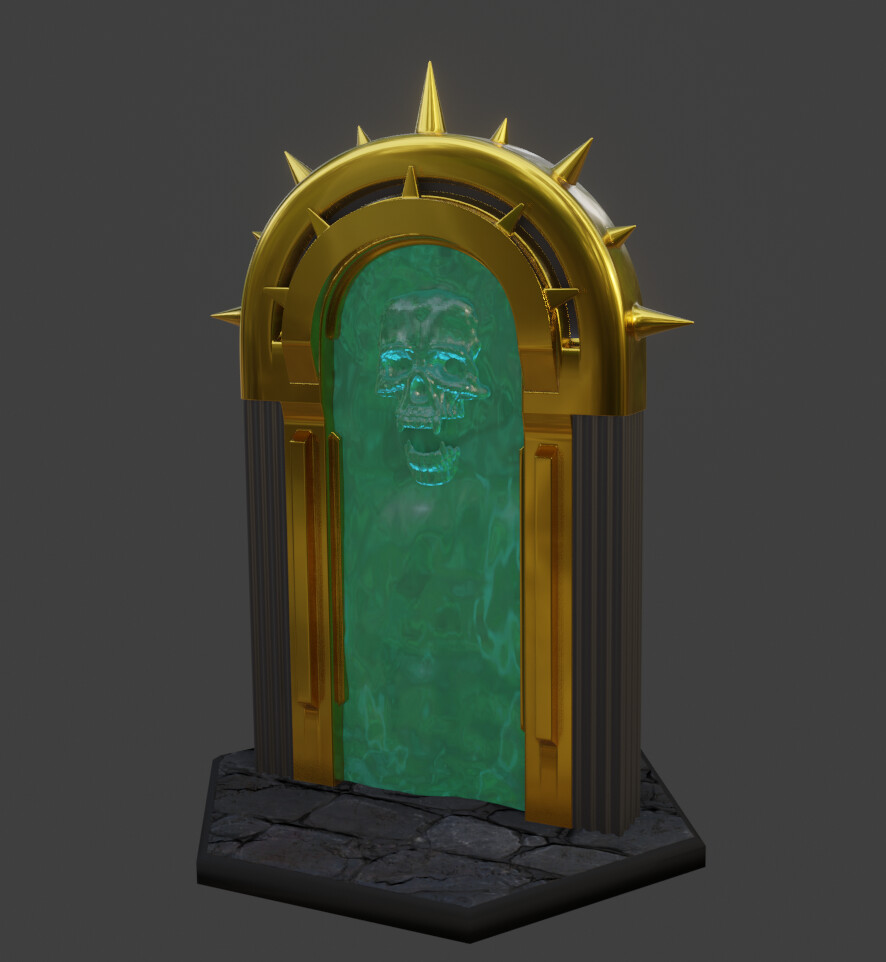 I hope, you enjoyed this little blog-post and I wish you all the best! Hope to hear from you , soon!
- Karsten

this thing is part of a tree (you guessed it) - and stiched together from 8 images, taken with my iPhone X (in portrait mode!)

the cool thing about this mode: the photoscan software seems to just evaluate the sharp object in the image,m not the blurred borders - this saves a ton of time for masking and calculating! - just wanted you other 'photoscanners' to know... 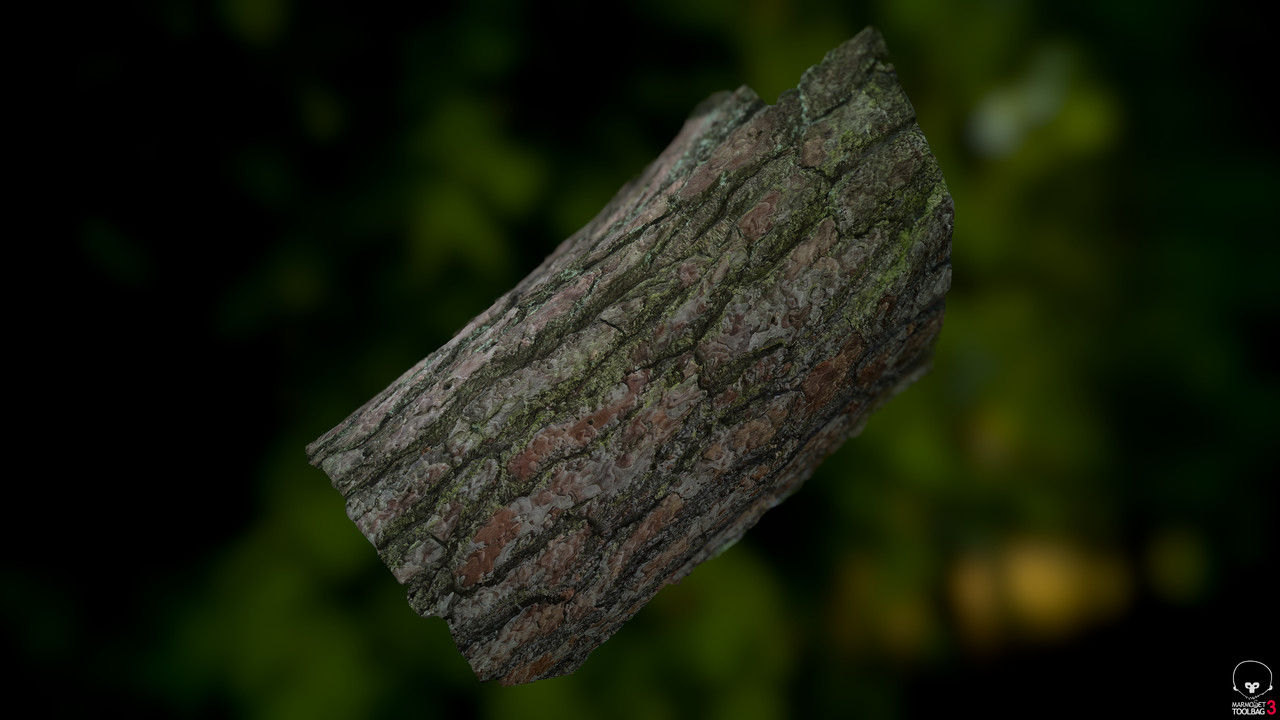 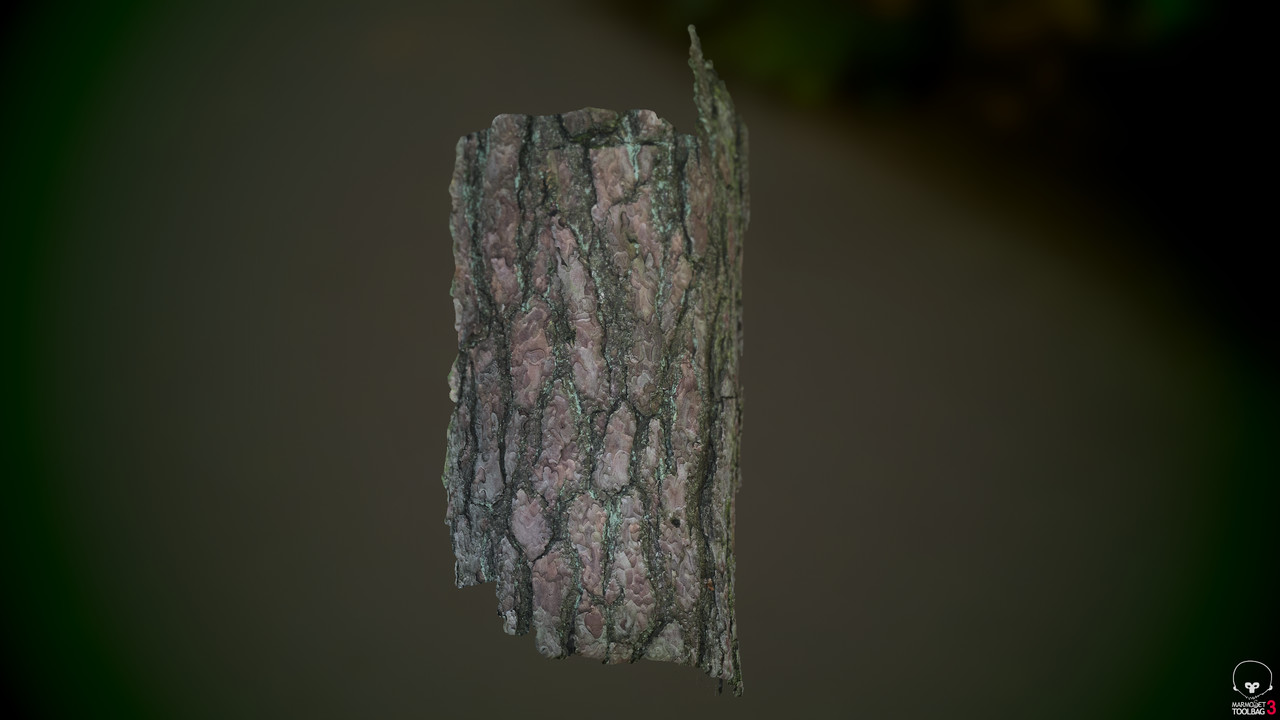 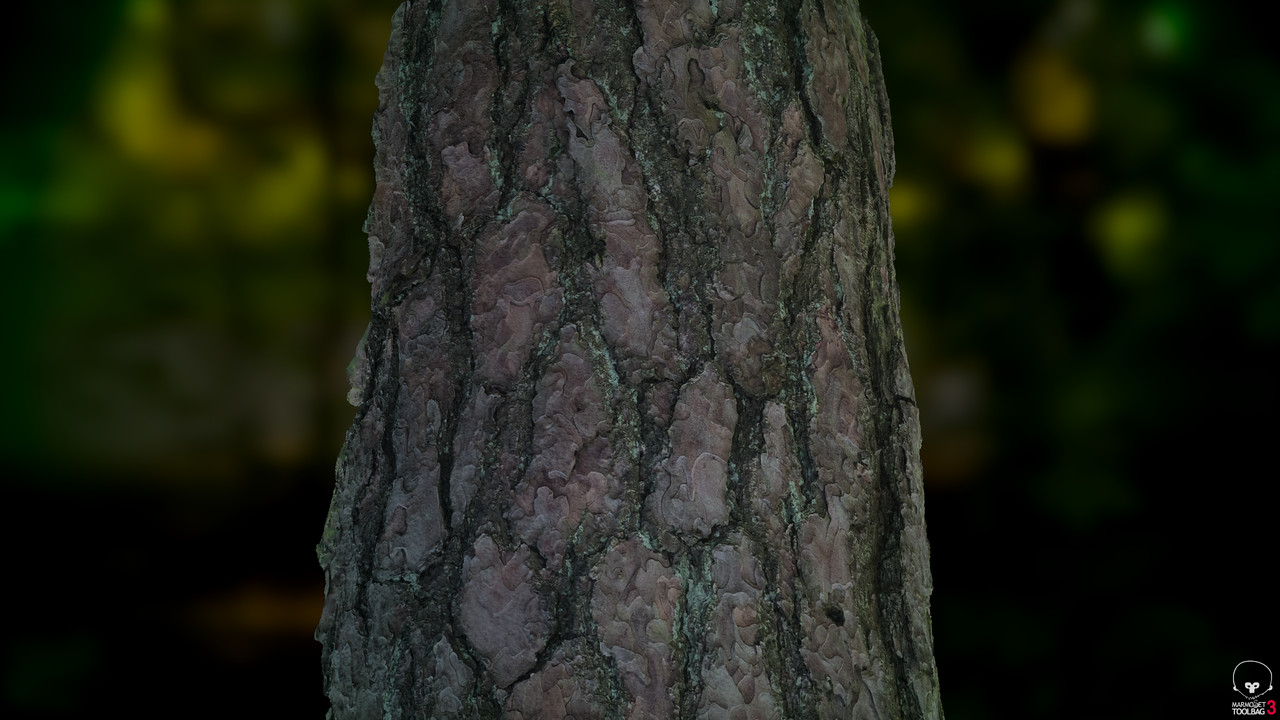 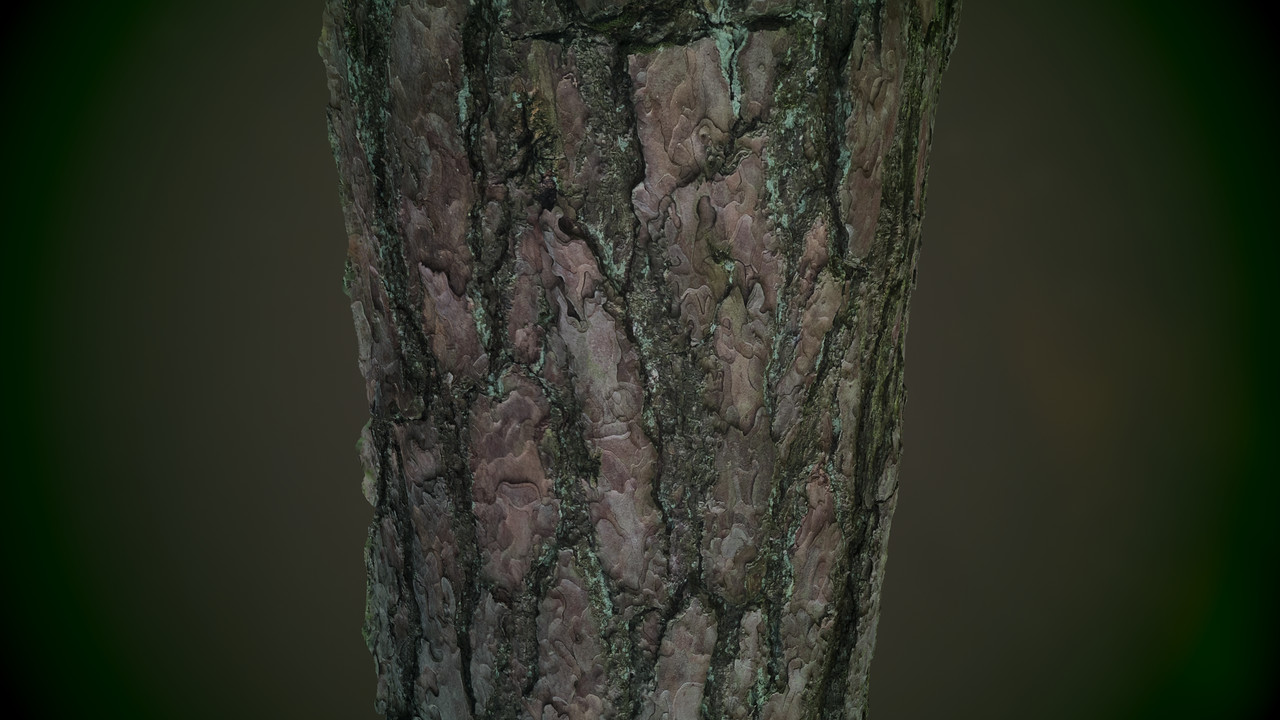 Oh - this is the original mesh, from dense pointcloud - a whoooping 2 million verts, 3.7m tris, 4k texture from images.

Sketchfab Beverage Can Challenge 2018 - breakdown of my entry "Jet Fuel"

I am not a product designer and not any good at 2D-logo art (both would have been very handy for this project hehehe)
- so I tried to focus on the can's paint-job and fx (like water drops, fingerprints, car-paint-like look and so on)

But first things first - I had to find a foundation-base for the can. I went with a brushed-aluminum type of material , very common and found on many cans (and also in the painter library)

Because I don't wanted to go with a "chipped away", beaten up look, I did not apply any other "primers" or something like that.

Later on, the brushed aluminum will be fully visible at the top and bottom of the can - for the rest of it, only the small
brushed pattern will augment the surface.

Ok - base was ready - what now?
In the past, I build up a BMX bike (was really fun) and I came across some relatively new color: "JetFuel" (sometimes
also referred as "oil slick") Technically , it's not a color or painted in common ways - this is achieved by a special heat treatment to the metal. 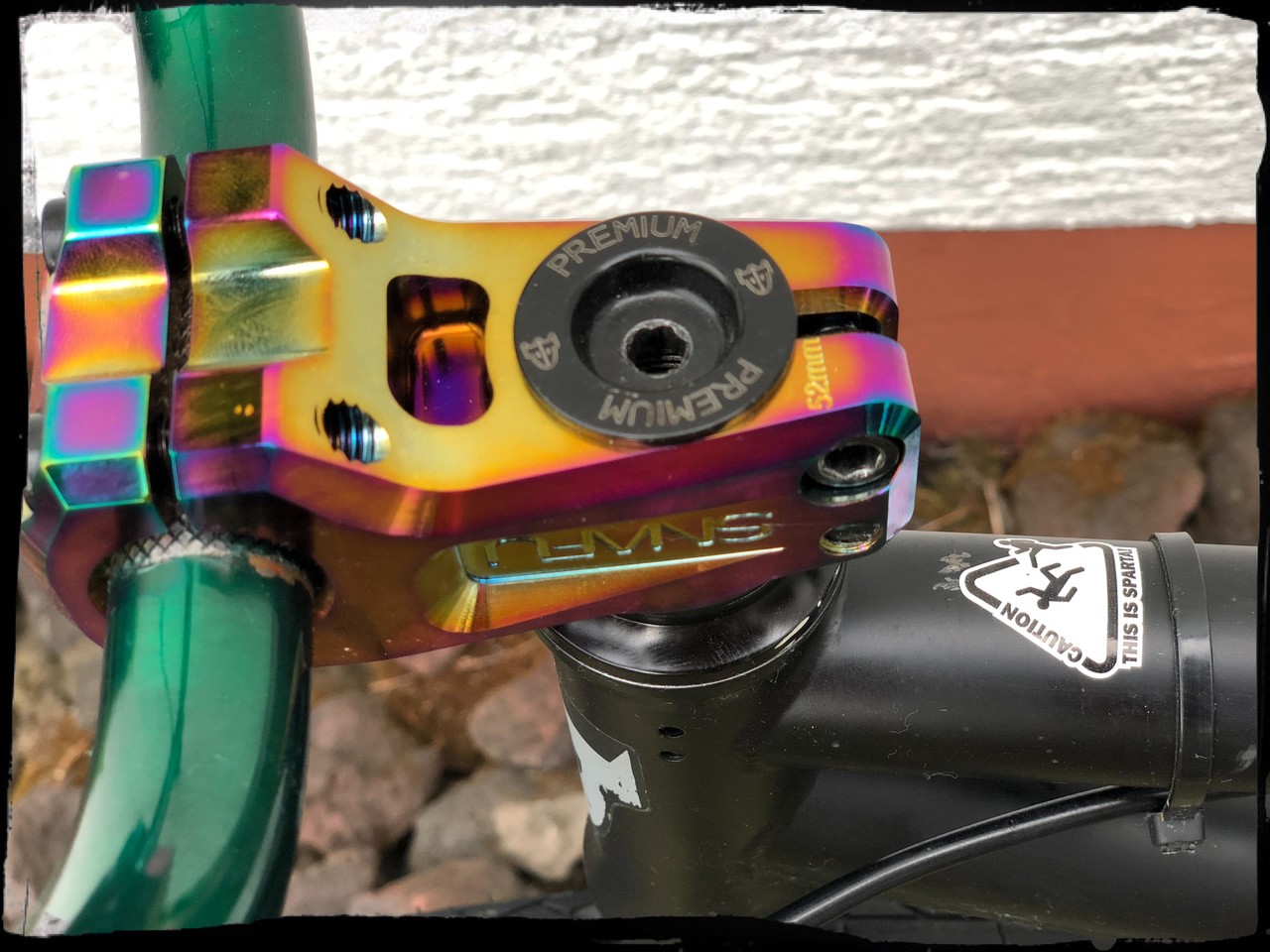 I was super glad, to find exactly such a material on the Substance Source library - yeah! After a bit of tweaking, the can got it's 2nd Layer.

Now, I decided to go a bit crazy (for the "bubbles" version) and put on another (very strange looking) material - magnetic fluid.

But for this one, I only used the metal and roughness information and tweaked the values until they blended into the jet fuel
material, like I wanted it to. The thing was, not to go rather full metal or non-metal with it (even if this will violate the
laws of PBR). However, this violation turned out to work very well towards the look, I was after. 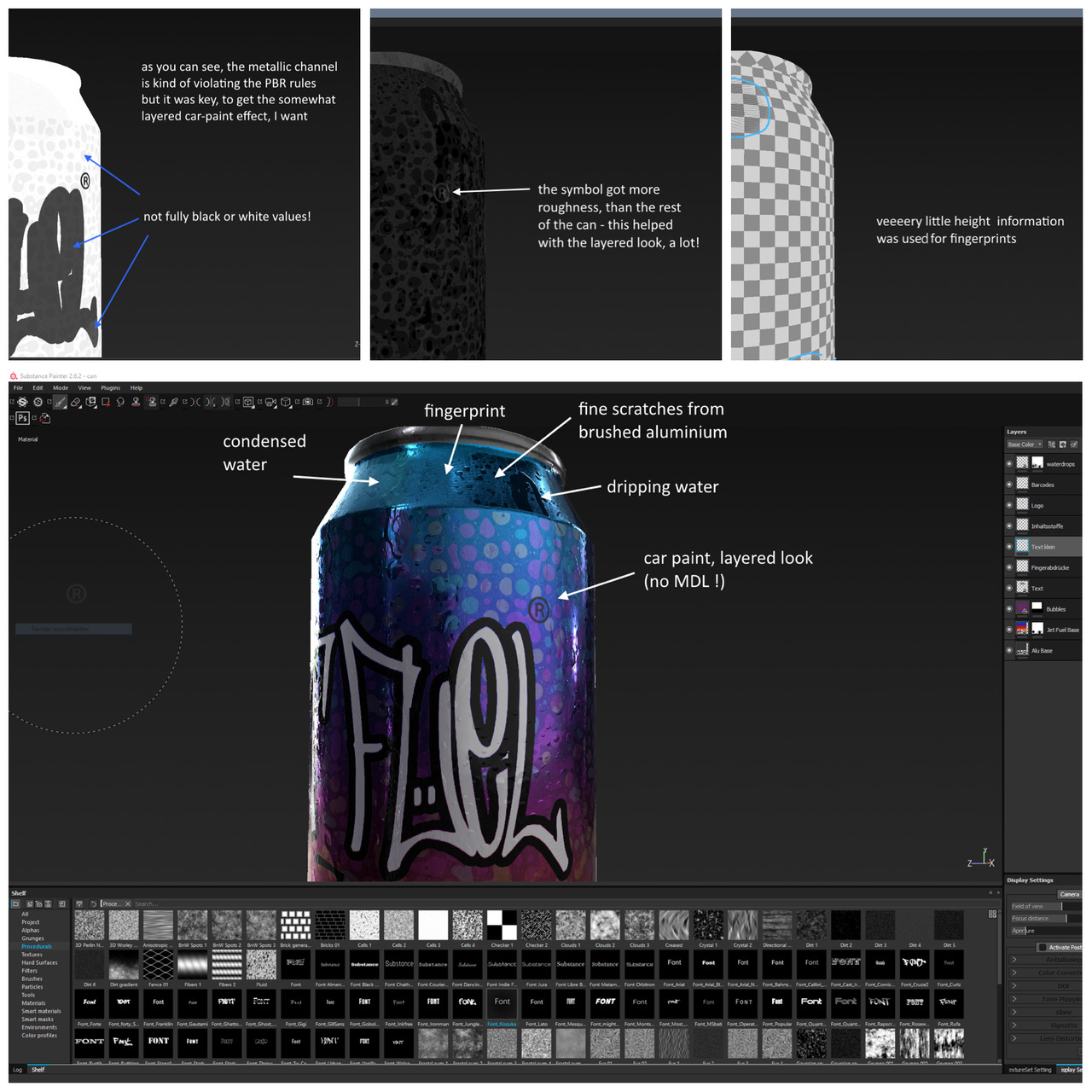 Time has come, to design some kind of logo (the hardest part for me)

My Idea was, to find something that stands for "power" and also resembles a turbine or a rocket.

After some research, I've found out about a "Reiki" symbol. It stands for "power" - and the swirl of it reminds of a turbine!

So i decided to pair it with the name of my fictive drink "Jet Fuel" to have something like a brand or logo on my can.

One side of the can was now kind of alive - but the other side - not.

The next part took me quiet a while to finish: Nutrition Information, Barcode, QR Code, Symbols!

Oh my lord! I went with real world reference (in fact, the empty energy drinks in front of me) to get this done.

Ok - I broke with the reference here and there, regarding the Informations ;) 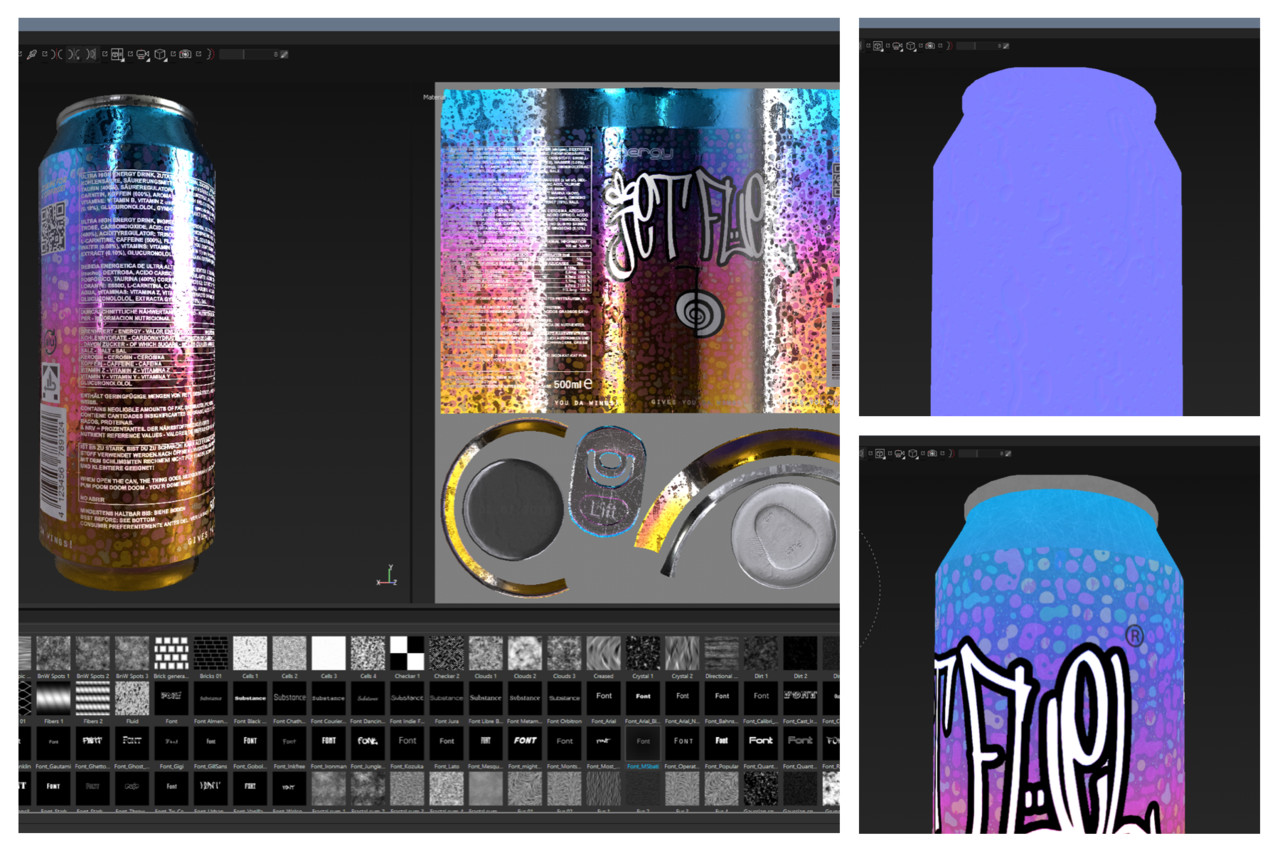 It was time to finish this asset with some final "touches" - literally! I put on some fingerprints here and there (painter alpha) and tweaked channels a lot. I decided, to go with miiinimal height and metal information only.

Because it's summer and cool, refreshing drinks are always welcome, I coated the can with some ice-cold condensed water.

For this one, only some channels were used, as well. Again, carefully tweaking and eyeballing was needed, to get the overall result, I was
going for. 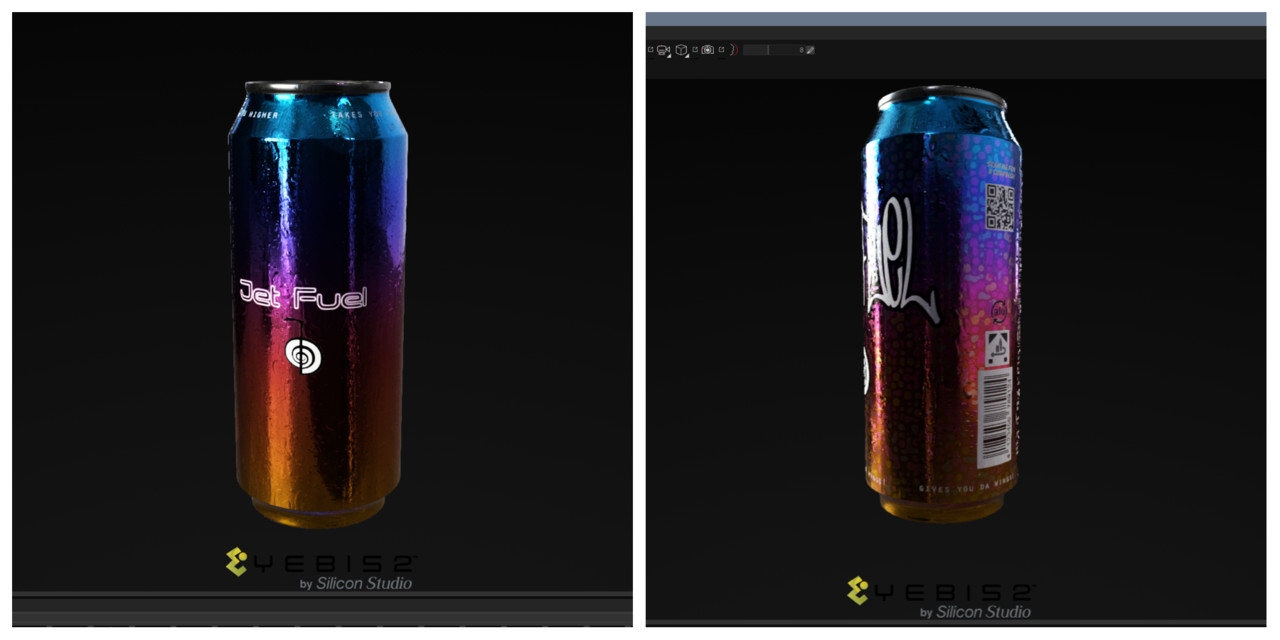 Another result of the setup was, the level of water condensation is tied to the camera and lighting! 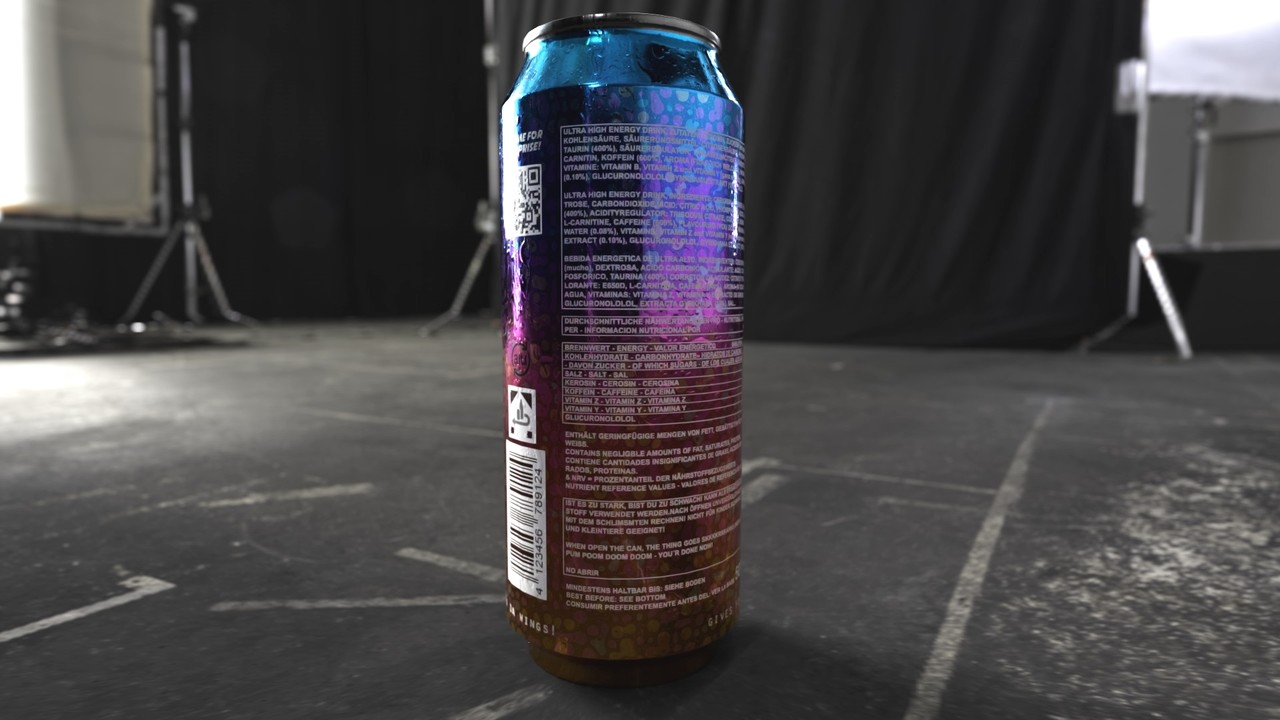 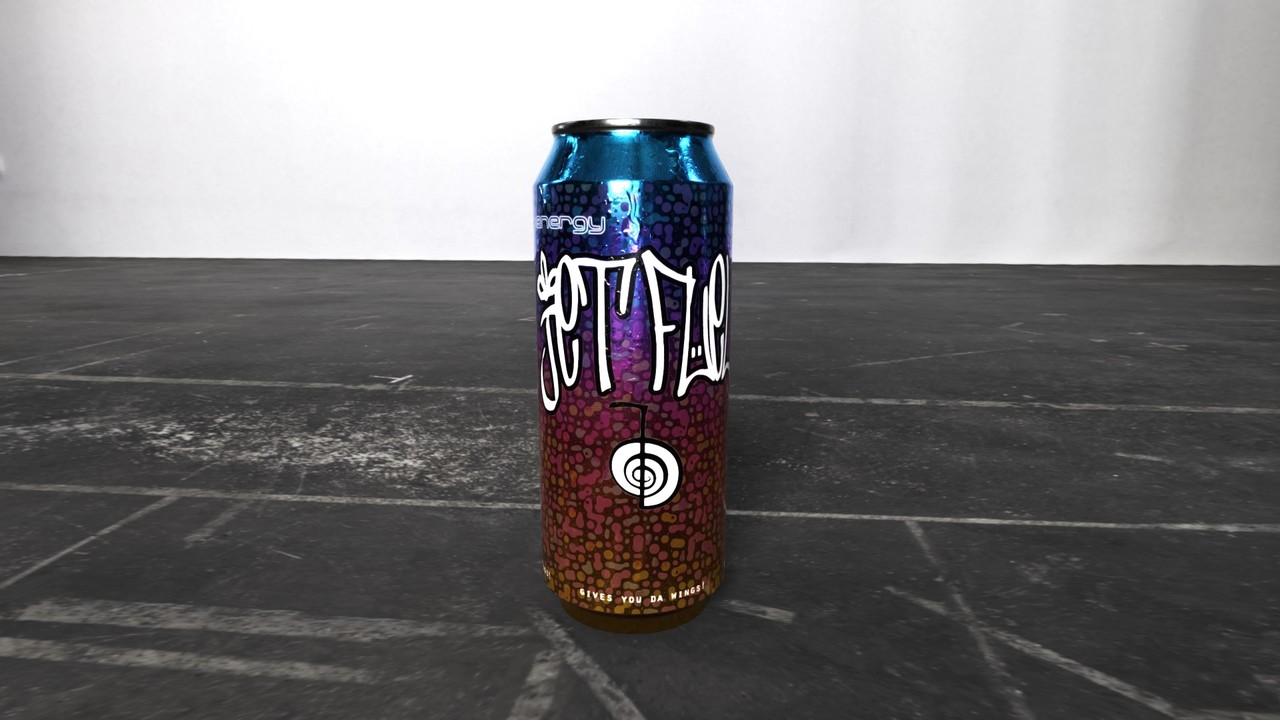 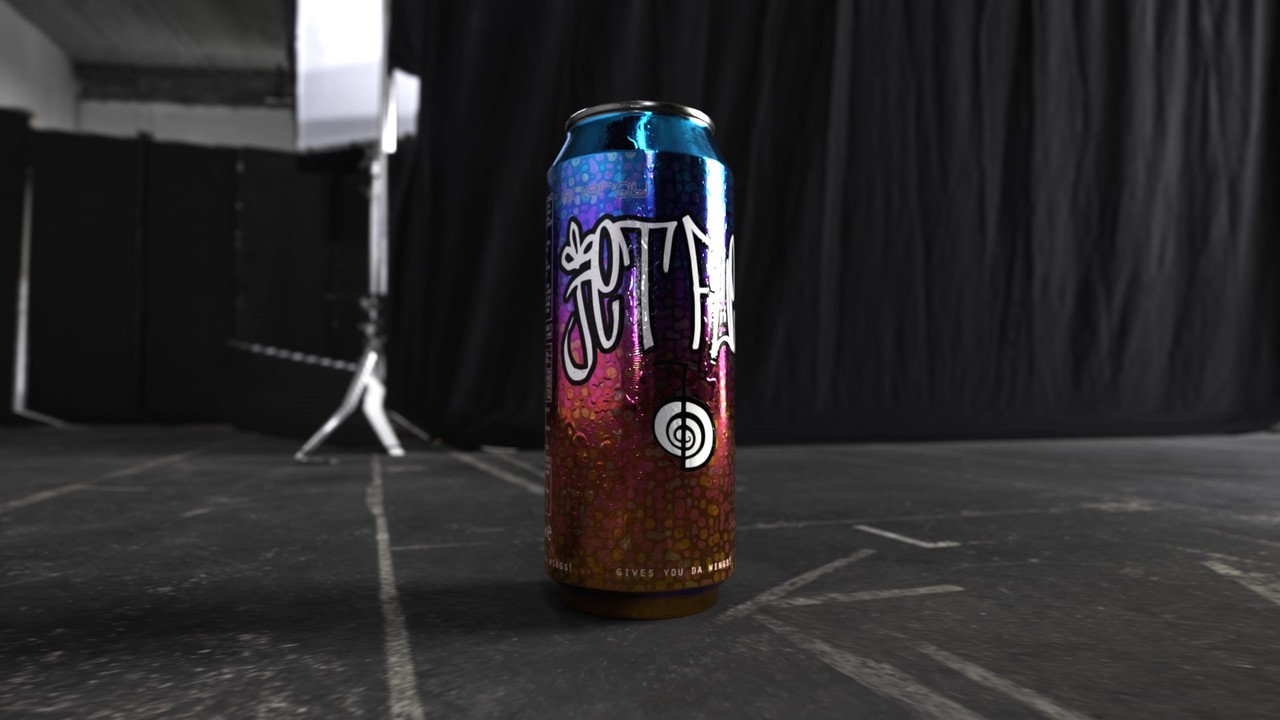 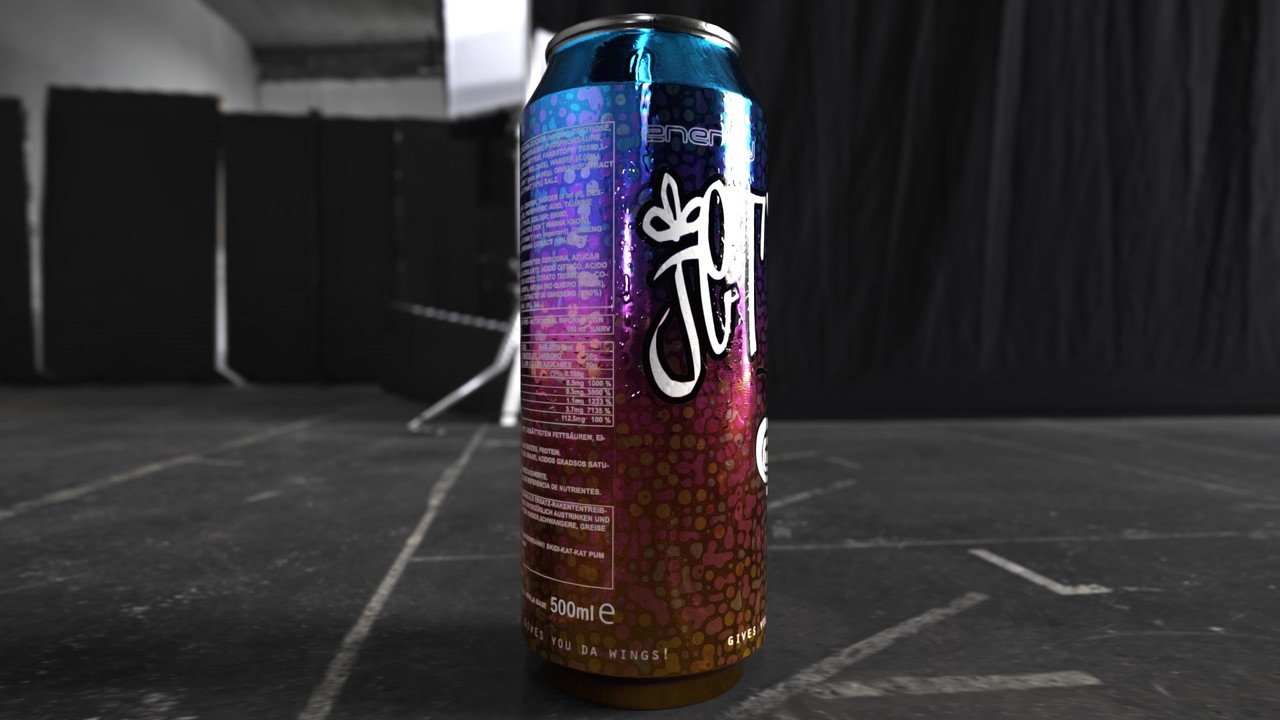 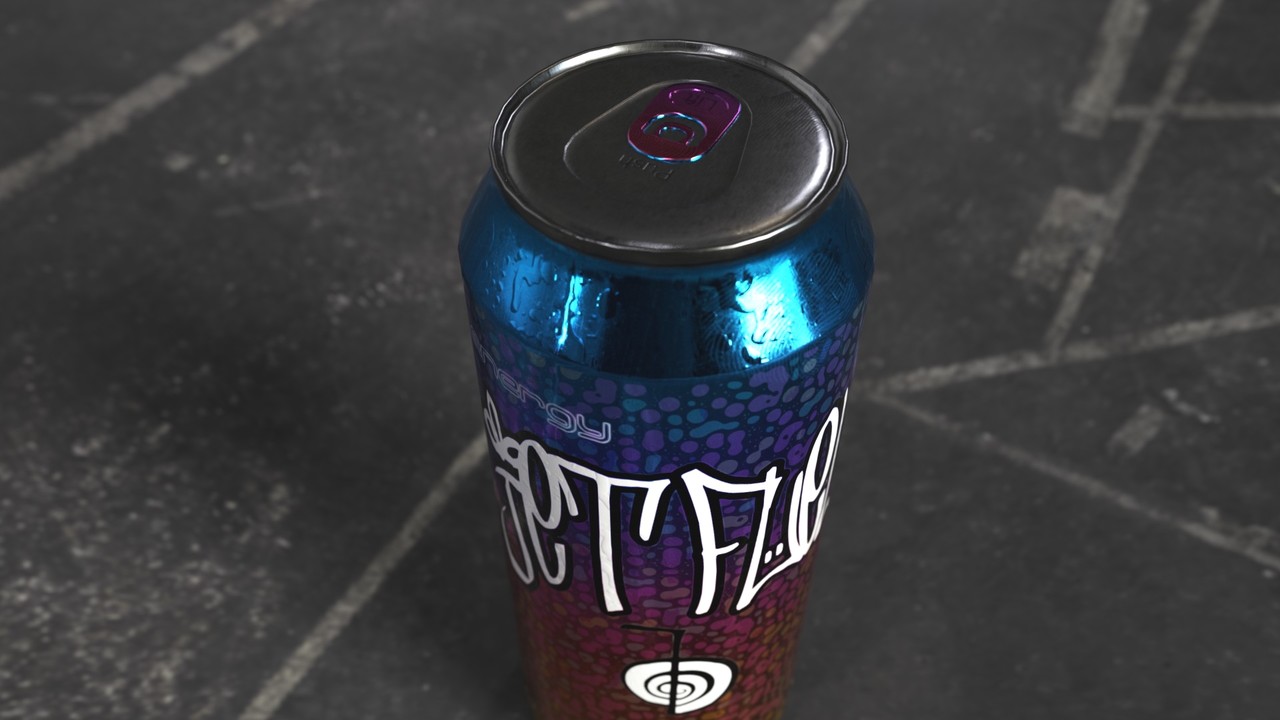 That's it for now - I hope, you've found it helpful and informative. Please leave a comment, if you feel like it.

A lot of things are done, but some are still left to do - bringing this blog to life is one of them  :)

I am not that kind of "blogger-type" - but I think I can use this blog for some random things, that are not necessarily related to 3D and CG..

I wish a good day to everybody !